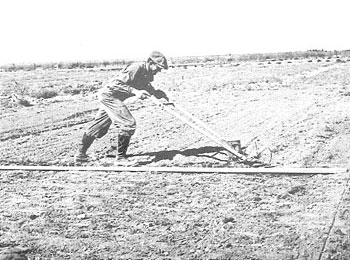 Early researchers did their share of hard work.
The development of a foundation seed program was a major contribution to the industry by the Aberdeen station. Seed is grown under controlled conditions resulting in four plants isolated in a growing situation. If any one of the four plants shows any sign of disease, all four plants are destroyed. Groups of plants that show healthy signs are harvested and used for foundation seed. Certified seed has been the answer for controlling many potato diseases including ringrot bacteria and mosaic disease. Foundation seed is certified by the Idaho Crop Improvement Association.

A leading researcher in potato-storage practice has been Walter Sparks, a horticulture scientist at the Aberdeen station for more than 40 years. His experiments and research papers have made him a well-known authority on the subject. Principles he developed are used in almost all potato-storage units today.

The Commission entered into an association with the University of Idaho's Aberdeen Agricultural Experimental Station in 1948, one year after Sparks began his work. The support given the research and education programs of the Aberdeen center by the IPC has been a major factor in the quality and quantity of work that they have been able to accomplish.

Results of the early seed-piece size work indicated that the "tubers cut in half yielded the best in every instance and the three-ounce seed cut in half were six bushels better in yield than the next highest plot, which was the six-ounce seed cut-in-half. The difference in cost of seed, however, would make a much greater difference in income per acre than the above yields would indicate."

In the line of farm equipment improvement, the research center built a potato cellar at a cost of $110 for materials in 1914. All the work in the construction was done by the station staff. The object was to get a maximum amount of safe storage room at a minimum cost and demonstrate to farmers that a cheap but effective storage cellar was possible on every farm where potatoes, beets, or other perishable crops were grown for sale or feed.

The following year, tests were made on the method of cutting seed and indicated a similarity to those of 1913. The highest yield of marketable tubers was obtained from the plats planted with the stem-end and blossom-end seed pieces. The test was conducted on twentieth-acre plats with six rows in each plat.