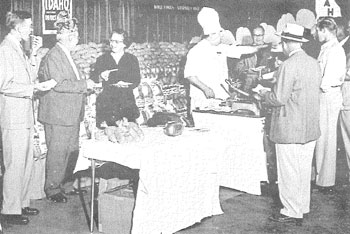 Joe Marshall wore his Idaho potato crown at produce conventions.
As Joe Marshall and others became successful in the potato business, the volume of potatoes grown in Idaho increased. With this increase in production came problems in marketing. It was customary, in those days, for many grower-shippers who loaded potatoes in cars in Idaho to start them to market usually with Chicago as a destination or diversion point. Chicago potato dealers bought and resold the Idaho® potatoes, finding homes for them in most of the large cities in the United States. With so much control centralized in Chicago and more than adequate supplies, the Idaho grower began to have price problems again.

By this time, many interested and dedicated people were involved in the growing and shipping of potatoes. While seeking a solution for their problems, they established the Idaho Fruit and Vegetable Advertising Commission, which later became the Idaho Potato Commission. Joe Marshall was involved in the original concept of the Commission and was a member of that promotion body for more than 20 years.

He especially believed in showing Idaho® potatoes at produce trade conventions, and for many years he attended the annual United Fresh Fruit and Vegetable Convention and supplied potatoes for the display that was sponsored by the Idaho Potato Commission.

He spent considerable time prior to the conventions personally selecting potatoes from his own cellars to be displayed for produce jobbers and brokers to see. His philosophy of showing the best merchandise available was summarized by an expression that he frequently used: "You don't take your skim-milk calf to the fair."

Joe Marshall's personal participation in these conventions as well as the frequent trips he made to marketing areas made him a well-known figure among produce trade people. By this time, the Idaho Potato Commission had a well-organized field-merchandising program in operation and with the assistance of C. G. Rice and Dean Probert, Joe Marshall became a spokesman for the Idaho® potato industry through the columns of newspapers in cities where conventions were held.

Newspaper writers reporting the convention would frequently interview Joe Marshall. Potatoes used in displays were often contributed to orphanages and children's homes following the convention, which created local publicity and earned Joe Marshall a reputation as a philanthropist.