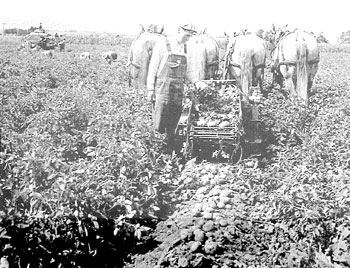 Joe Marshall inspects quality of potatoes behind digger.
It was obvious to people who worked with Joe Marshall that he really loved agriculture and, particularly, the growing of potatoes. In the early days, potato fields were small and were irrigated primarily with gravity irrigation. During the growing season, Joe Marshall traveled constantly from one field to another personally supervising the growing of the crop. He frequently dug into hills of potatoes to check the condition of the tubers and the progress of development during the growing season. He was always ready to pass on his expertise to other growers and his reputation as a potato expert became widespread throughout the Idaho industry.

Before the days of rubber-coated digger chains and padded handling equipment, Joe Marshall had his equipment wrapped with twine to provide padding and prevent bruising of the tubers. It became a well-known fact among Joe Marshall's employees that anyone who was observed handling potatoes carelessly or bruising them would be instantly unemployed. One cardinal rule in his packing operations was that if a sack of potatoes was dropped, the sack had to be opened and the potatoes sorted to replace damaged or bruised tubers. Marshall felt that the sack of potatoes was on its way to one of his customers, and he wanted to be sure that the customer would not be disappointed with the quality in the bag.

Although a trendsetter in the industry, he did not accept everything new. Even when the industry converted for the most part to washing potatoes before packing, Joe Marshall refused to take the step. So strong was his conviction that washing potatoes was a bad practice, he continued to pack his tubers dry as long as he grew and shipped potatoes.

His son, Charles Marshall, went into the potato shipping business on his own, handling potatoes that he grew and the potatoes of many other growers in the area around Jerome, Idaho. He has stated that he was unable to meet the rigid quality standards set by his father and that he never shipped potatoes under any of his father's brands.

With his self-imposed quality standards, Joe Marshall never compromised for the expediency of getting rid of a particular lot of potatoes.