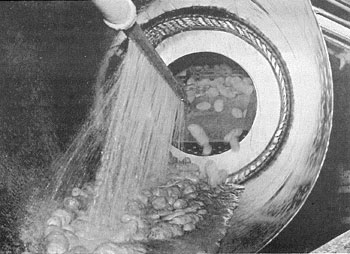 Washing potatoes was an early marketing innovation.
As the Idaho® potato industry grew in size, the number of individual people involved in shipping operations also greatly increased. Nampa, Twin Falls, Burley, Aberdeen, Blackfoot, Pocatello, Shelley, Idaho Falls, Rexburg, Rigby and many other Idaho communities had their so-called "spud alley" where potato-shipping warehouses had been built along the railroad.

As the packing function became separated from the growing aspect, the potato shipper became a dealer and began to be a prominent and influential man in the potato industry. The shippers came from three sources. There were the people like Jack Simplot who were first growers and, seeing the opportunities in the shipping industry, established themselves as dealers. There were people like Ed Harper, Sr., who had been in the produce business at the terminal market end and sensed a business opportunity in Idaho as an originator of potato shipments. There were also those in Southwest Idaho who had produce sheds already in operation in which they were sorting and packing apples, prunes, pears, and other fruit grown in that section of the state. By adding potatoes and onions to their list of commodities, they were able to keep their crews and facilities busy through the winter after the fruit had been handled.

In Eastern Idaho, names such as Fielding, Sage, Holland, Christensen, and Burnett numbered among the very-earliest shipping operations. The Idaho Potato Growers Cooperative was also one of the early shippers of Idaho® potatoes. Ed Harper established his business at Pocatello under the name of Idaho Pack and proved to be one of the leaders and innovative merchandisers of the Idaho potato business. As the number of shippers proliferated, it was estimated that, at the peak, there were more than 200 shipping warehouses in the state buying potatoes from growers and packing them in 100-pound burlap bags for sale to cash track buyers, jobbers, and carlot receivers outside the state with or without the help of brokers,.

Lack of grading standards and government inspections left the contents of the potato bags up to the conscience of the dealer who was doing the packing. Ethical considerations were minimal, and the quality of merchandise that went into the bag depended a great deal on what was available and the business practices of the shipper involved.