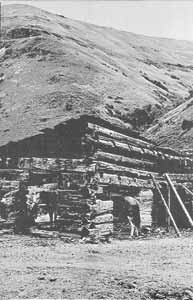 Log cabins were standard housing in Spalding's day.
In the last half of the 19th century, a flood tide of settlers pushed westward. Although the immigrants came to Western America for various reasons, it was the farmers who were destined to make a lasting impression on the new land. The gold miners came and went as the fur trappers before them had done and the soldiers and adventurers in their day. It remained for the farmers and cattlemen, however, to put down permanent roots and establish communities, which have endured to the present day.

Brigham Young had brought his Mormon pioneers to the Salt Lake Valley where they immediately set about the establishment of their farms. According to Richard Jensen of the LDS Church Historical Department, the manuscript history of Brigham Young on July 24, 1847, states: "About noon, the five-acre potato patch was plowed when the brethren commenced planting their seed potatoes."

The first irrigation in the Salt Lake Valley was for the benefit of the newly planted potatoes. A week later, it was evident that the potatoes were growing, according to General History, July 31, 1847.

As the numbers of Mormon colonists in the Salt Lake Valley increased, they pushed outward seeking new lands. In a sense, the first permanent white settlement in Idaho was an accident. The LDS farmers had been directed to establish a new colony north of the Salt Lake Valley area in the Cache Valley. Believing they were still in Utah, the parties selected a site that turned out to be across the state line in Idaho. As their predecessors had in Utah, the new families of settlers began immediately to establish their farms. Here, again, potatoes were one of the first items the farmers planted. William Goforth Nelson was one of the first settlers at Franklin, and he recorded the following about the activities of the colony in the summer of 1860: "We all camped in our wagons the first summer, but we had all got homes built by winter; these houses were built in the present meetinghouse lot in a fort. I spent the summer working on ditches, canyon roads, and hauling poles and wood from the canyon. I raised 33 bushels of potatoes, which is all that was raised in Franklin that summer except a few onions."