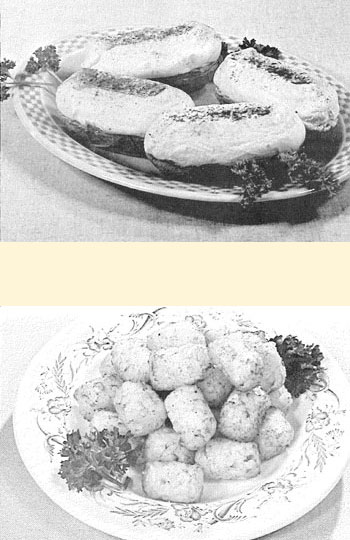 (Top)-Frozen stuffed, baked potatoes failed to become popular. (Bottom)-Potato "rounds" were one of the successful new processed products.
Quantities of the potato product that did find a way satisfactorily through the frying process and were quick frozen received a somewhat more-enthusiastic market acceptance than previous products. This encouraged the Simplot research team to commission the design of a fryer specifically engineered for the production of French fried potatoes. The problem of the sinking potato strips was solved by the invention of an oscillating basket system that lifted and advanced the potato strips through the boiling shortening until they reached the discharge end of the fryer and were picked up by a conveyor screen. The solution to the breakdown problem was to use stainless steel for the construction of the fryer and all of its parts. This noncorrosive metal did not produce the chemical reaction that broke down the frying fat. A centrifuge system was added to clean the liquid shortening on a continuing basis.

This development established a reasonable economic basis for frozen French fried potatoes since entire fryer loads of shortening did not have to be discarded. The constant cleaning of the frying medium kept it in fresh condition. Shortening was added only as the potato strips absorbed it and the problems that had plagued the process earlier were essentially solved.

At the same time, other food processors in the Idaho area had heard of the Simplot work and were becoming interested in the processing of potatoes, as well. As the development of the frozen French fried potato was going forth in Caldwell, Ore-Ida Foods in Ontario, Oregon, were experimenting with another potato product-a frozen, shredded potato patty. Ore-Ida built their first plant in 1951. Both the frozen French fries and frozen potato patties were successful as retail items. National private brand distributors of frozen foods became interested and had the two companies produce the new products for them to sell under their own labels.

The major problem confronting Idaho's potato processors in the distribution of new products was lack of available space in supermarket frozen-food counters. Already filled with a number of frozen fruits and vegetables, frozen juice concentrates, and a number of other new items, it became difficult to get retailers interested in a relatively low-priced frozen potato product.

Processors began investigating the possibility of frozen French fried potatoes for use in restaurants. Visits to restaurant kitchens in various cities established the fact that most potatoes were being handled badly by restaurant personnel and that the American public was seldom served a really good French fried potato in a commercial restaurant. Refinement in the processing of frozen French fries made some very significant improvements in flavor, texture, color, and digestibility of this international favorite. This gave the frozen French fries processed in Idaho a distinct quality advantage over the food that the average restaurant chef could put on the plate starting with raw potatoes. It also significantly reduced preparation time and labor expense in the institutional kitchen.