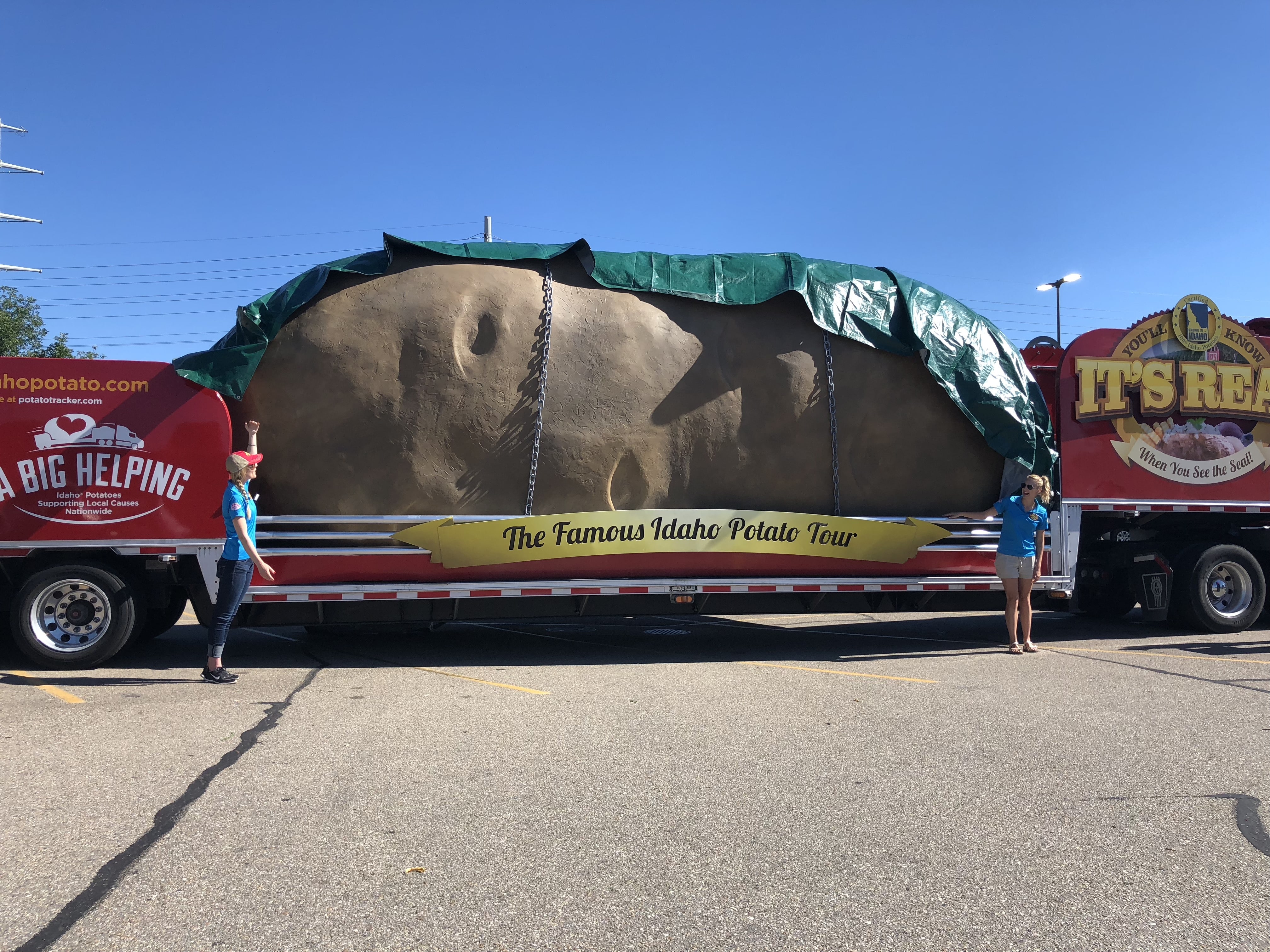 EAGLE, ID, June 28, 2018 – With much anticipation the Idaho Potato Commission (IPC) unveiled Big Idaho® Potato 2.0. Weighing in at 4 tons, the fiberglass potato is just as impressive as the original, but with a few subtle differences. While the potato is still 28 feet long and 11.5 feet high, it’s a little trimmer in the middle (10 feet wide), and two tons lighter so it can travel to more places.

When folks saw the original potato, the most commonly asked question was, “Is it real?” There’s no doubt the Tater Team (the Truck’s traveling trio), will continue to be asked that same question. If the potato was real, it would…

The Big Idaho® Potato Truck originally launched in 2012 in celebration of the IPC’s 75th anniversary and was supposed to be on the road for just one year. Instead, it became an instant success from coast-to-coast and a part of pop culture. After traveling 155,000 miles, visiting more than 7,200 cities and being included in more selfies than we’ll ever be able to count, the original potato became too road worn to travel and is now retired in its home state of Idaho.

During its seven years on the road, the Truck did some pretty cool things!

The original potato was donated to Kristie Wolfe, a former Tater Team member, who is in the process of turning it into a tiny house in Idaho.  And, if it’s anything like her other tiny houses - a Hobbit Inn in Washington state, a treehouse in Hawaii and a reclaimed Forest Service Lookout in Idaho - it will be a sight to see! Follow the transformation on Instagram @bigidahopotatohotel.

The Big Idaho® Potato Truck’s charity component, A Big Helping - Idaho Potatoes Supporting Local Causes Nationwide, will continue. In many of the markets the Truck visits, it works with local charities to help raise funds and awareness about the organization or the important cause it supports. In 2017 the Truck donated $500 each to 32 charities across the country.

To see when the Big Idaho® Potato Truck will be in your neck of the woods visit   www.bigidahopotatotruck.com.

Established in 1937, the IPC is a state agency responsible for promoting and protecting the famous “Grown in Idaho®” seal, a federally registered certification mark that assures consumers are purchasing genuine, top-quality Idaho® potatoes. Idaho’s growing season of warm days and cool nights, ample mountain-fed irrigation, and rich volcanic soil give Idaho® potatoes their unique texture, taste and dependable performance, which differentiates them from potatoes grown in other states.