With 849 posts, chances are there's already an answer to your question. Please try searching below before submitting a question to Dr. Potato. Use multiple words to help narrow down the results. For example, search for "potatoes" and "group" if looking for an answer on cooking potatoes for large groups.

Are All Idaho® Potatoes Automatically Considered A Russet Potato?

If the bag in the supermarket says simply Idaho baking potato is that automatically a russet?

Thanks for your question. Just saying an Idaho baking potato does not make it from Idaho. The bag needs to have the “Grown in Idaho Seal” clearly marked. For examples, Google Idaho potato 5 pound bag and images and you’ll see several examples.

Many years ago, Idaho growers primarily produced the Russet Burbank variety. When I joined the Idaho Potato Commission in 1989 it was over 95% of all the potatoes coming out of Idaho. Often this was referred to as an Idaho russet. As other varieties of russets became popular, the Commission decided that an Idaho potato could not just be labeled an Idaho Russet, but needed to reflect the actual variety name on the bag, carton or box. Now there are several russet varieties coming from Idaho, with the Russet Norkotah being one of the more popular ones sold in retail. In fact, the Idaho Russet Burbank is now about 50% of the crop and Idaho growers have expanded to reds, yellows or golds and fingerlings too. Here is a link to the commonly found varieties:

Our Most Popular Varieties

And here is a description and photo of the two most popular varieties of russet potatoes now grown in Idaho:

Background:
Developed in 1914 by Lou Sweet, a previous president of the Potato Association of America. Scientist Luther successfully produced many varieties over the years, the Russet Burbank is their greatest commercial success and has established a strong brand equity for the state. A late-maturing variety that requires a 140- to 150-day growing season.

Appearance:
The exterior skin is relatively thin and light brown in color. The exterior shape is oval and slightly flattened, with few shallow eyes. The interior is off-white to ivory and moderately dense.

Usage:
Fresh, frozen, or dehydrated, this variety is ideal to all preparation styles. 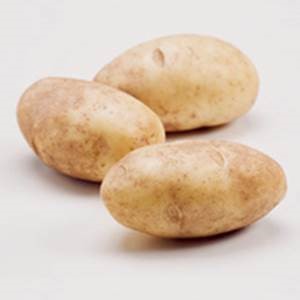 Background:
Released in 1987 by North Dakota State University, this variety now ranks second in popularity for fresh-market use. Attractive type (refers to consistent oval shape); a high percentage of No. 1 potatoes is common with this early-maturing variety.

Usage:
Grown primarily for the fresh market. Because of the uniform appearance, has had good success in the retail grocery segment and foodservice. Well suited to all preparation types.