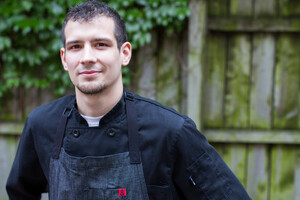 Chef Tim Havidic’s early memories are of watching his grandfather, a military chef, in the kitchen. At age 14, he was mesmerized by the detail and passion he witnessed while working as a commis for Certified Master Chef, Steve Jilleba. He learned precise butchery from Master Butcher Hans Seabold and chefs Daryl Nash and Corky Clark. After moving to Los Angeles, he spear-headed recipe development and preparation for Lindy and Grundy Meats. Returning to Chicago, he began as Sous Chef at Chef Homaro Cantu’s Moto, quickly rising to Executive Chef at Cantu’s next venture, iNG.

Havidic’s excels in the preparation of foundations with slow-built stocks and butchering perfect cuts of meat. In an article appearing in Huffington Post, he told mentor Cantu, “If I limit my sources of inspiration, I’m limiting myself. When I see a new ingredient or an old one I haven’t worked with in a while, I think of ways to change it into something innovative, interactive, fun and, of course, delicious.”