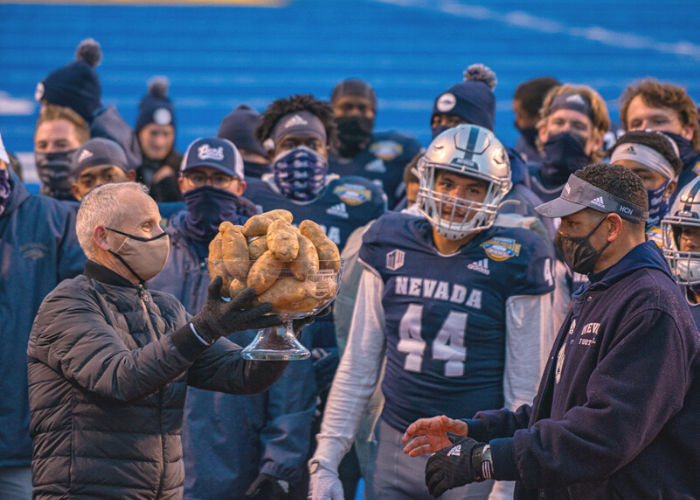 Boise, Idaho, December 23, 2020 -- The Famous Idaho® Potato Bowl (FIPB) has become one of the most anticipated college football games of the season. From helping to launch the careers of NFL great like Josh Allen and BYU’s Zack Wilson who threw 18 for 18 in 2018 beginning his historic rise as a must watch quarterback, to the French Fry bath tradition that has been recognized by Yahoo! Sports “as one of the best traditions in all of sports,” the FIPB is exciting, unpredictable and entertaining.

Just seconds before the Nevada Wolf Pack defeated the Tulane Green Wave (38-27) at the 24th Annual Famous Idaho® Potato Bowl, the pumped-up players doused head coach Jay Norvell with Idaho® potato fries and Gatorade. However, when the fries landed on the playing surface the Wolf Pack were penalized 15 yards for unsportsmanlike conduct. The Green Wave took advantage and ran for a 65-yard touchdown. It wasn’t enough to change the outcome of the game but it surely generated headlines. And, it’s 2020 so nothing surprises us.

“With so many changes and cancellations surrounding college sports, we are more than grateful the Famous Idaho® Potato Bowl could be played this year on the blue turf in Albertsons stadium. Even though fans weren’t allowed, millions of folks around the country who tuned into ESPN radio and/or television were treated to an exciting game between two very talented teams,” explained Frank Muir, President & CEO, Idaho Potato Commission (IPC). “Both the Wolf Pack and Green Wave should be extremely proud of themselves. Playing football at this high level is a huge accomplishment especially during this very unpredictable time of our lives.”

The IPC’s sponsorship rate was reduced since fans were not allowed in the stadium and all the pre-game festivities were cancelled. Despite a restrictive environment due to COVID-19, it was still clear to the game’s 2+ million ESPN viewers and ESPN radio listeners who the naming sponsor was. The IPC logo, the “Grown in Idaho®” seal and a cut-out of Spuddy Buddy, the IPC’s mascot, were visible throughout most of the game. Additionally, the IPC received nine ESPN television and radio ads and multiple mentions by the sportscasters.

Those who watched the commercials were treated to the debut of a social media video starring BYU alum, pro-football player and Idaho native, Taysom Hill proudly promoting Idaho® potatoes.