And…It’s A Wrap! After Nine Months On The Road The 2018 Big Idaho® Potato Truck Tour Has Officially Ended 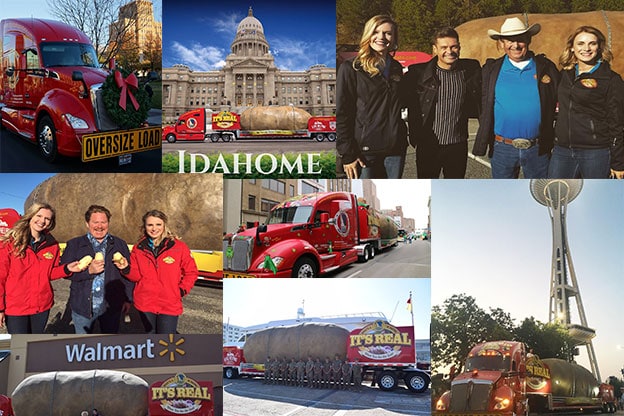 However the biggest news of the year was the unveiling of Big Idaho® Potato 2.0. Weighing in at 4 tons, the fiberglass potato is just as impressive as the original, but with a few subtle differences. The potato is still 28 feet long and 11.5 feet high, but it’s a little trimmer in the middle (10 feet wide), and two tons lighter so it can travel to more places. The original potato, which was only supposed to last one year, became too road worn to travel and now resides in its home state of Idaho.

“The Big Idaho® Potato Truck continues to drive many of our marketing campaigns. It’s the focus of our national television commercials, it helps promote the potato’s impressive nutritional profile and generates hundreds of millions of impressions for the Idaho® potato brand,” explained Frank Muir, President & CEO, Idaho Potato Commission. “Now that we’ve got a new fiberglass potato, there’s no end in sight for the biggest potato on wheels.”

After seven years the Truck’s track record is pretty impressive…

The 2019 Big Idaho® Potato Truck Tour schedule will be available in early February 2019 at www.bigidahopotato.com.

Established in 1937, the Idaho Potato Commission (IPC) is a state agency that is responsible for promoting and protecting the famous “Grown in Idaho®” seal, a federally registered trademark that assures consumers they are purchasing genuine, top-quality Idaho® potatoes. Idaho’s growing season of warm days and cool nights, ample mountain-fed irrigation and rich volcanic soil, give Idaho® potatoes their unique texture, taste and dependable performance. These ideal growing conditions are what differentiate Idaho® potatoes from potatoes grown in other states. For more information, visit www.idahopotato.com.