Project Reinvent was recognized for revitalizing the potato in the eyes of foodservice industry professionals by showcasing how Idaho® potatoes can be used in a diverse array of exciting and modern recipes. The IPC teamed up with top chefs and award-winning photographers to create a tantalizing collection of mouth-watering print ads. 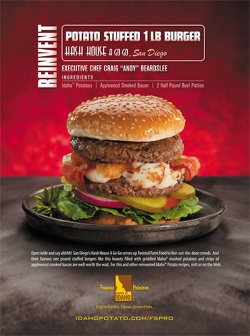 Creative recipes, like the Potato Stuffed 1 lb. Burger by Executive Chef Craig "Andy" Beardslee of Hash House A Go Go in San Diego, were featured in foodservice publications as part of the IPC’s Project Reinvent campaign.

Recipes like Harvest Hash by Ann Cooper, aka "The Renegade Lunch Lady,” in the Boulder Valley School District, and Chef Bryce Rademan’s (of Spitz in Los Angeles, California) Street-Cart Fries encourages culinary professionals to make Idaho® potatoes a mainstay on their menus. The Project Reinvent ad theme has illuminated the pages of foodservice trade publications for more than five years and continues to inspire chefs all over the country to include potatoes across all day-parts.

“Project Reinvent creatively showcases Idaho® potatoes in unique dishes,” said Don Odiorne, Vice President, Foodservice, IPC. When we launched the campaign in 2006, the goal was to help foodservice professionals think beyond traditional mashed, fried and baked potato recipes… and it’s been working. Never before have I seen so many different and delicious potato dishes featured on menus across the country. It has been an absolute pleasure working with a team of talented chefs and photographers, and we are thrilled to be recognized in Produce Business for the hard work of our combined efforts.” 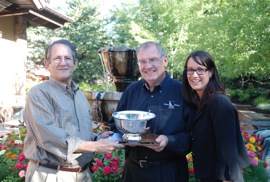 Creative recipes, like the Potato Stuffed 1 lb. Burger by Executive Chef Craig "Andy" Beardslee of Hash House A Go Go in San Diego, were featured in foodservice publications as part of the IPC’s Project Reinvent campaign.