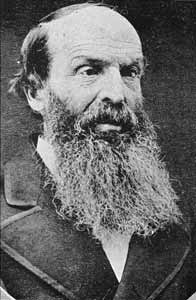 Henry Spalding planted the first potatoes in Idaho.
About ten miles from the mouth of the Clearwater they entered a large valley on the south side of the river, through which the Lapwai Creek ran. The valley was wide enough for cultivation, with about half-a-mile between the foothills. There was some small timber along the creek. About two and one-half miles up the creek from its mouth, the missionaries found a site that promised sufficiently good soil.

Drury tells about the beginnings of Idaho agriculture: "Shortly before starting for the north, Spalding had tried some of his Eastern horses at plowing. To his disappointment, he found that they were not sufficiently recovered from the hard trip over the mountains to do the work. Describing this experience, he said: 'The Indians saw my difficulty and said "Let not your heart cry. Give us hoes, and we will break all the ground you need." So, Spalding distributed about 30 hoes and told them to work a week for him and two weeks for themselves. He also agreed to furnish seed.

By the first of May, the Indians had cultivated and planted 15 acres for themselves. Spalding found it discouraging and difficult work and soon realized that he could not hope to plant 100 acres, as he had first planned. The Indians had never done any cultivating and knew nothing of the simplest principles of agriculture. Many of the Indians placed implicit trust in Spalding's declaration that the fruits of the soil would make them independent of the hunt and refrained from going after their annual supply of game.

Spalding sowed two bushels of peas and planted seven bushels of potatoes on the land that was cultivated for him. The balance of the seed he gave to the Indians. He also planted a large assortment of garden vegetables and set out a nursery of apple trees. The true beginning of agriculture and horticulture in Idaho was there at Lapwai."

Neither Spalding nor Whitman, a Methodist missionary at Waiilatpu, raised sufficient food supplies during 1837 to supply fully their needs before another harvest could be gathered. In a letter on May 10, 1839, Whitman told of the problem, "Mr. Spalding and myself were unable to eat potatoes before the last year. The first crop was almost an entire failure, and, though I had a tolerable crop, the demand was so great for seed I could afford but few for eating."