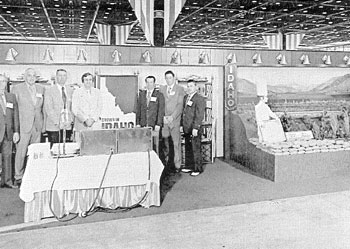 Idaho produce convention display in the early 1970s.
As a means of communicating with the Idaho® potato industry, a weekly market flash was inaugurated. Each of the field merchandisers would phone in a weekly report summarizing the market conditions in the city where he had been making calls. This would provide sales leads to Idaho industry people who were looking for customers. The familiar "market flash" became a very-important document to the Idaho shipping industry and later to Idaho processors as it provided a direct information feedback from major markets all over the country.

In June of 1965, C. G. Rice retired from active participation in the field-merchandising program because of his health. The routine of constant travel and attendance at conventions proved to be a very-demanding one since it involved driving long distances in all kinds of weather conditions as well as making trade calls in the market. Charles "Chuck" McDaniel was hired to replace C. G. Rice that same year and, after a short indoctrination in Idaho, began the gypsy life of living out of his automobile and staying in motels and hotels all over the territory. Domeny, Probert, and McDaniel had the company of their wives in their travels. C. G. Rice had always traveled alone.

As the problem of misrepresentation grew in importance, the field merchandisers on occasion found themselves investigating reports of cheating in the markets. Sometimes repackers would buy used Idaho bags and put cheaper Russet potatoes from other production areas in them to be sold at the premium Idaho price. It soon became obvious that the field merchandisers could not act both as policemen and goodwill ambassadors, and the work was turned over to specialists.

The selling season for Idaho was roughly from August first to mid-June, giving the field-merchandising staff a chance to return to Idaho during midsummer to discuss problems and opportunities with shippers and members of the Potato Commission and to attend the annual Idaho Grower Shippers Association convention in Sun Valley, Idaho. The field merchandisers were given an opportunity to address the convention delegates as a regular part of the program for a verbal report of their year's activities and to discuss changes that were taking place in the industry that were of interest to potato shippers.