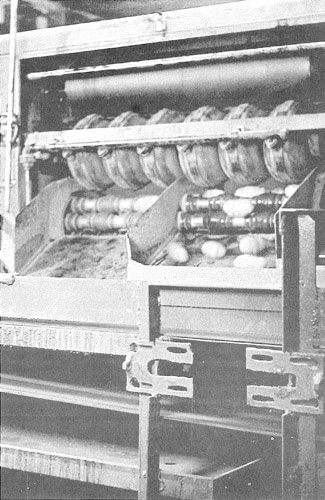 Potato stamping machine in use in fresh packing warehouse.
With the quality reputation of Idaho® potatoes being established nationwide, a major problem facing the industry in the mid-1950s was how to identify the product as being GROWN in Idaho. Potatoes grown in other states were "riding" on the Commission's promotions and making claims to be "like Idaho's" or being repacked in Idaho bags to profit from the premium price commanded by Idaho grown potatoes.

In the summer of 1955, application for the "Grown in Idaho" trademark was filed in the U.S. Patent Office. The trademark was used on bags and boxes of potatoes leaving Idaho, but they sometimes ended up by being repacked with Russets not grown in the Gem State. The ideal solution seemed to be to identify each and every potato that deserved the premium price.

A determined effort taken by the Commission was a program to stamp "Grown in Idaho" on every number one potato. This resulted in the need for some sort of stamping machine. Commission members were so certain that the stamping machine was the answer that they supported the program strongly. Shippers were also convinced that this type of identification was necessary and many bought stamping machines and began operating them in their warehouses.

But the problems occurring with the manufacture and operation of such a machine were paramount. Nonuniform stamping, potato deterioration from stamping processes, high costs of purchasing and operating the machines, the threat of a dwindling fresh market and a booming processed market, along with the discovery that housewives really did not want stamped potatoes, killed the stamping machine idea. Finally in 1974 (almost 20 years later), they had to give up on the project.

Potato processor J. R. Simplot appeared in 1956 before the Commission to recommend that advertising tie-ins should include the processing industry. He foresaw a big future for processed potatoes in Idaho and stressed the need for additional research on processed products and methods.