12,000 Pounds of Potatoes Donated To Manhattan's Holy Apostles Soup Kitchen as Thank You to New Yorkers 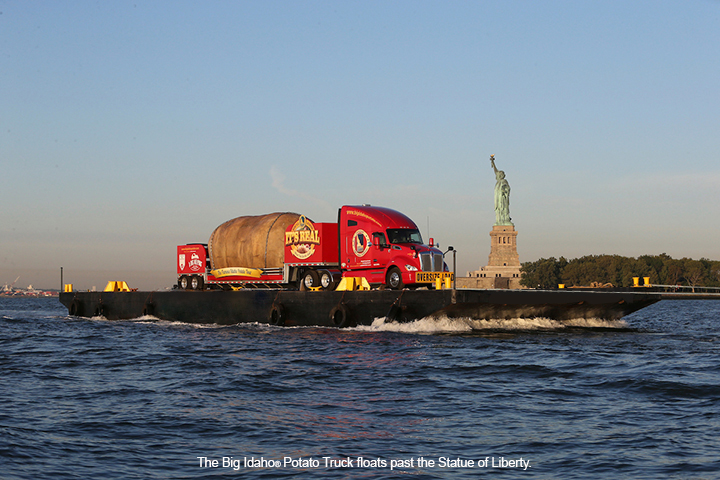 EAGLE, IDAHO (September 2, 2016) -- The world’s largest potato on wheels traded its tires for buoys in celebration of the 2016 Idaho® Potato Harvest. On Wednesday, August 24, the giant spud embarked on her maiden voyage through the New York Harbor – beginning in Brooklyn and passing all the major landmarks in South Manhattan including the Brooklyn Bridge, Statue of Liberty and Freedom Tower.

Over the next six weeks 320,000 acres in Idaho will be harvested and yield more than 13 billion pounds of Idaho® potatoes. New York is the largest consumer of Idaho® potatoes, and two iconic New York-based restaurants, Macy’s and Toffenetti’s, were instrumental in establishing Idaho® baked potatoes as a premium menu item back in the 1930’s.

New Yorkers consume more potatoes than any other state. To show its appreciation, the Idaho Potato Commission (IPC) donated 12,000 pounds of Idaho® potatoes (equivalent to the weight of the Big Idaho® Potato on the Truck) to Holy Apostles Soup Kitchen, New York's largest emergency food program. They've consistently served 1,000 homeless and hungry people every weekday for the past 30 years.

“New Yorkers have played a major role in building the Idaho® potato brand and making the baked Idaho® potato one of the most sought after side dishes on the menu,” explained Frank Muir, President & CEO of the IPC. “It was a privilege for us to spend time at Holy Apostles Soup Kitchen and provide and serve healthy Idaho® potatoes to those who are less fortunate.”

The Big Idaho® Potato Truck was built five years ago to celebrate the IPC’s 75th anniversary. The organization wanted to celebrate the milestone in a big way, and more importantly, include the entire country in the celebration. The idea for the Truck was born from a vintage postcard depicting a giant potato on a flatbed trailer with the quote, “We Grow ‘Em Big in Idaho.” To date, the Truck has traveled over 100,000 miles promoting the heart-healthy benefits of the Idaho® potato and donating to local charities through its “A Big Helping” program.

Established in 1937, the Idaho Potato Commission (IPC) is a state agency that is responsible for promoting and protecting the famous “Grown in Idaho®” seal, a federally registered trademark that assures consumers they are purchasing genuine, top-quality Idaho® potatoes. Idaho’s growing season of warm days and cool nights, ample mountain–fed irrigation and rich volcanic soil, give Idaho® potatoes their unique texture, taste and dependable performance. These ideal growing conditions are what differentiate Idaho® potatoes from potatoes grown in other states. For more information, visit: www.idahopotato.com.